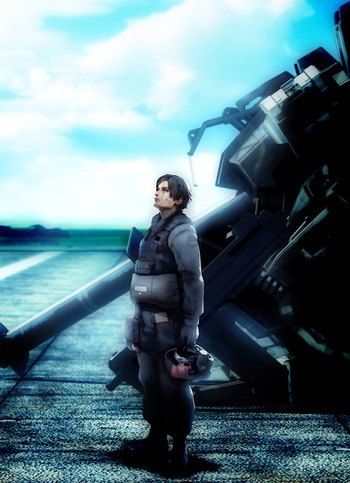 Front Mission 5 is a Humongous Mecha Strategy RPG video game published and developed by Square Enix for the PlayStation 2 console. It was first released in Japan on December 29, 2005. The game is a numbered sequel to Front Mission 4. However, the story takes place throughout the series, ranging from Front Mission to the end of Front Mission 4, resolving various plot arcs that may have been left unanswered. The game's also known as Front Mission 5: Scars of the War.

The game looks into the story of Walter Feng, a Chinese-American from the United States of the New Continent (USN) who moves to Huffman Island. He lived in Freedom City with two other kids, Randy O'Neill and Glen Duval. The trio witnessed the 1st Huffman Conflict in 2070, a conflict between the Oceania Cooperative Union (OCU) and the USN. The kids were separated when OCU and USN governments repatriated them. They later, however, reunite, during a peacekeeping operation in the Huffman Crisis in 2086.

Feng continues to work in the USN Army as a wanzer pilot even after Randy dies in the line of duty. He later applies to join the USN's Strike Wyverns and is deployed worldwide, where he faces off against a terrorist conspiracy known as Grimnir, a terrorist group that aims to destroy the foundation of supernations and bring back the days of nation states.