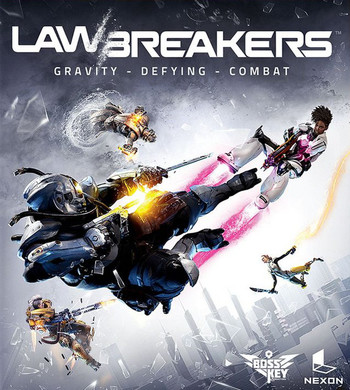 LawBreakers was a Hero Shooter developed by Boss Key Productions, led by Cliff Bleszinski of Unreal Tournament and Gears of War fame, was published by Nexon, and was available on Steam and PlayStation 4. It released on August 8, 2017 and was shut down on September 14, 2018.

Despite building a decent level of hype and receiving positive critical reviews, the game died on arrival as its online global player count plummeted below 1,000 players within a week of the late 2017 launch and was empty before the year ended.

The blame for this failure was caused by multiple reasons: it was laid upon the feet of Bleszinski for his overly aggressive hype generation such as calling it "the start of a billion dollar IP", being pigeonholed by potential fans reacting to said hype as an "overly edgy & bland" Overwatch clone, launching into a completely saturated market for Hero Shooters, picking the Playstation 4 over the more active multiplayer scene on the Xbox One, and the decision to cancel the intended launch as a free to play game to charge money.

The failure of Lawbreakers saw Boss Key release their 80's Retro styled Fortnite clone Radical Heights in what Boss Key called "X-treme Early Access", in a dire attempt to generate revenue but it also failed to gain an audience... also due to launching in a completely saturated market, this time for Fortnite-style games. The studio closed its doors in mid 2018. Both games remained online for a few months after until the permanent shutdown of Lawbreakers servers in September 2018.

In 2049, a mysterious cataclysmic disaster known as the Shattering completely destroyed Earth's moon. Fifty years later, much of Earth is still uninhabitable. With boiling oceans and huge storms engulfing the planet, what few areas remain are subject to gravitational instability and lawlessness. The gravitational shifts have lead to a boom in technological advancements surrounding the phenomenon. The US Government and other nations form together the Transnational Authority of Supplement Control to help maintain order, but there are many criminals, as well as the Shura Corporation, who are more than capable of putting up a fight.

The game revolved around 3-Dimensional combat through the use of anti-gravity zones on the maps. Players were split into teams of 5, and randomly chosen between fighting for the Law, or being a Breaker.