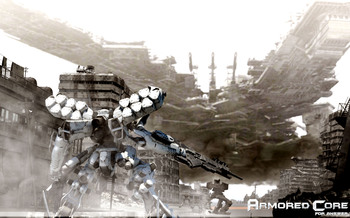 The rest is up to you.
Congratulations [troper], from this point on, you are a Raven.
Advertisement:

The Armored Core series is a mech-combat video game series developed by FromSoftware. It started on the original PlayStation, and over the years, has been on the PlayStation 2, PSP, PlayStation 3, Xbox 360, and mobile phones. With the exception of Armored Core 2, each numbered sequel seems to take place in a different continuity, separate from previous, and later, numbered titles.

The main draw of all Armored Core games is that the titular Core can be separated into various parts; core, head, leg, generators, weapons and so on. Players are offered choice of parts in the market which can be mix and matched at will, before taking them out on missions in third-person mecha shooter gameplay.

The games in the series and their plots are:

The Marvelous-developed Daemon X Machina was developed by some former staff who worked on this series, and it shares several themes and mechanics.