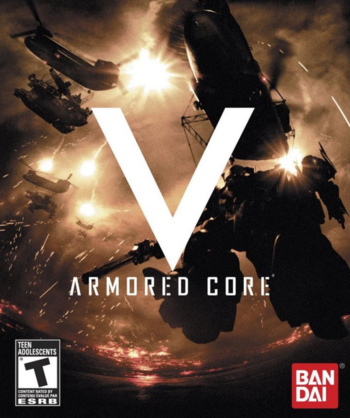 Armored Core V is the fifth main instalment in the Armored Core mech-combat game series developed by FromSoftware and its fourteenth instalment overall. It was published by Bandai Namco Entertainment for Xbox 360 and PlayStation 3 in early 2012.
Advertisement:

After long, bloody wars have polluted most of the Earth, humanity is sequestered in a portion of land that has grown into a large Megapolis simply called The City. Led by a despotic ruler called "Father", The City manages to get by even during harshest of conflicts, except when the Resistance takes matters into their own hands and initiates a coup, emboldened by the addition of a very skilled AC pilot: you. However, things get complicated when a nefarious third party called The Corporation seemingly aids Father by supplying strange, often powerful technology, while at the same time pursuing the Player Character relentlessly.

Armored Core V marks a return to the series' more traditional gameplay in contrast to Armored Core 4 and Armored Core: For Answer, featuring a weightier combat system that emphasizes on tactical gameplay and allows players to use level geography to their advantage.

The online component is made up of two modes: team battles called "Conquest Mode" (up to five against five), with the fifth member designated as an operator who oversees the battle and issues orders to their team, where each side battles over specific objectives across the map; the other is Free Battle, where players can fight each other in traditional team deathmatches, one-on-one duels, or a battle royale with up to 8 ACs. On March 20, 2014, the online servers for Armored Core V shut down, leaving only Story Mode and Free Battle available.

Has a sequel in Armored Core: Verdict Day.