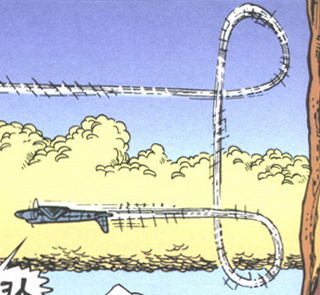 Let's hope the "fasten seat belt" sign is on.
"They were spectacular. We recorded thirty-four kills out of a possible thirty-six with no losses. If I hadn't been there, I'd think it was propaganda."
— Tycho Celchu, Rogue Squadron
Advertisement:

A trope possessed by many an Ace Pilot, and sometimes their Wing Man too.

Heroes, as a rule, are supposed to be better than everyone else. However, if everyone is using similar (flying) machines to fight, it can be hard to make him stand out above his peers: enter Improbable Piloting Skills. If there’s ANY chance something can be done with a Cool Plane/Humongous Mecha/Hover Tank/Giant Flyer of choice (and indeed quite possibly even if there isn't), he can do it on the spur of the moment with a 100% success rate. And, of course, anything he climbs into basically gains an instant + 100 to all its stats.

Some of the most common Improbable Piloting skills are:

While these powers, particularly "If it flies", can occur alone, they're normally part of a package deal that is free for any hero whose main mode of combat is aerial warfare of some kind. Less important characters may be allowed weaker versions of these, but the highest grades are the domain of the main protagonist (and probably his obligatory rival) alone. This aerial awesomeness may be counterbalanced if they're Graceful in Their Element and clumsy outside of it.

Do keep in mind, though, that Tropes Are Not Bad—some of these can actually happen in Real Life (and very much have).