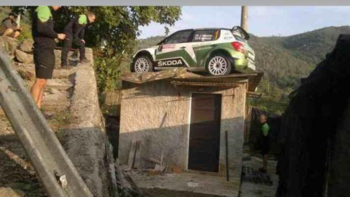 "Sorry. Did I say on the garage? I meant in the garage."
Advertisement:

What better way to demonstrate a Badass Driver's skill than by Improbable Parking Skills, especially with Parallel Parking.

Sometimes Improbable Parking Skills are demonstrated by parking a vehicle efficiently in adverse conditions. In other cases, though, the driver chooses a difficult parking method to save time, or simply to show off.

One common method is to pull the handbrake while turning, using the drift to get the car exactly where you want it (as seen in The Blues Brothers). Expect screeching tires. Other nigh-impossible parking stunts include making the car climb or jump over other cars, fall from a height, roll over, etc.

Not to be confused with Rockstar Parking, which is about it being easy to find a space.