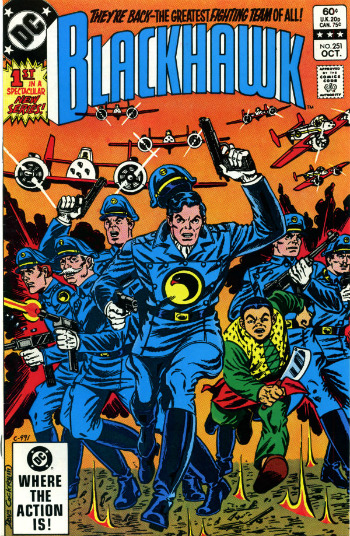 A war/military adventure feature from Quality Comics, and later, after Quality went out of business, DC Comics. The series first appeared in Military Comics #1 (August, 1941), created by Will Eisner, Chuck Cuidera, and Bob Powell. The Blackhawk Squadron was an international team made up mostly of aviators from nations occupied by the Axis in World War II. They continued appearing in Military Comics until issue #102 (October, 1950). They also had their own eponymous magazine, starting in 1944, which survived Quality itself. The series was published continuously between 1941 and 1968, with revivals published in 1976-1977 and 1982-1984 (a highly-regarded run by Mark Evanier and Dan Spiegle.)

The Blackhawk Squadron that existed between 1941 and 1983 consisted primarily of:

In a 1988 miniseries, Howard Chaykin introduced an updated, somewhat revisionist and "reimagined," version of the team, which carried over into a subsequent ongoing series running from 1989-1990 (plus a 1992 one-shot.) While the miniseries took place during World War II, the ongoing series took place in the early years of the Cold War. Blackhawks from this continuity included:

For a while, the Chaykin Blackhawks seemed to be the "official" version in DC Comics continuity, but since the 1990s, the continuity status has become unclear, with the 1941-1983 versions seeming to predominate, but characters and concepts from the Chaykin version also being used at various times, in various stories.

One element from the 1989-1992 series that has been used in several DC series is Blackhawk Express (or Blackhawk, Inc.) — a corporation handling air freight and/or mercenary activities that was established by members of the original Blackhawk Squadron. The time-tossed Zinda "Lady Blackhawk" Blake owns 1/8 of this corporation. Zinda (who did not appear in the "Chaykin continuity") was the only member of the team appearing regularly, and its last surviving member, in the Birds of Prey series, until 2011.

An index of Blackhawk appearances outside the regular Blackhawk comic book (through 2001) appears here.

In 2011, DC relaunched Blackhawks as part of the New 52, this time featuring a modern incarnation of the group — "an elite force of military specialists equipped with the latest in cutting-edge hardware and vehicles", under United Nations authority. Headquartered out of "The Eyrie", a secluded mountaintop base, their hangar is packed with dozens of state-of-the-art aircraft for various situations. The 2011 series was canceled after eight issues. These Blackhawks (who appear unrelated to any previous incarnation) include:

Blackhawk was a very popular series in its day, and inspired several adaptations, including a short-lived 1950 Radio Drama, a 1952 movie serial starring Kirk Alyn (who also, incidentally, played Superman in serials), and a 1982 prose novel written by William Rotsler. The Blackhawks have also appeared in several episodes of the Justice League animated series and the Justice League: The New Frontier movie.

A new film adaptation to be helmed by Steven Spielberg was announced in April 2018 (possibly set in the DC Extended Universe). David Koepp announced working on the script in late 2020.