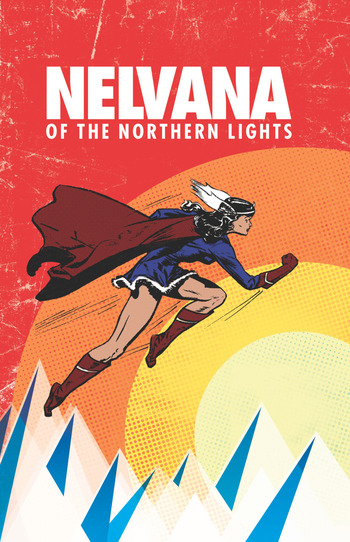 Nelvana is a fictional Inuit demigoddess who fought villains such as gangsters and aliens. She is a Canadian comic book superheroine created by Adrian Dingle in the 1940s and had a short run. She debuted in Hillborough Studios' Triumph-Adventure Comics #1 (August 1941).

She, and along with other golden age Canadian comic book characters, were created during World War II to fill in a market when Canada had to restrict trade with non-essential goods which included comic books. But after that was lifted these golden age characters fell into obscurity. Her issues have recently been reprinted thanks to the help of a Kickstarter campaign.

We never get to see her origin story or how she came to be a protector of the north, all we as the reader ever find out is that her father Koliak the mighty, king of the northern lights married a mortal woman which pissed off the gods. A curse was placed on him where he can never be seen by earthly beings, but he can still be seen in the form of the northern lights. His son Tanero, also shares the curse in the way that he can never be seen by white men and can normally be seen as a bloodhound. Nelvana escapes this fate.

Her powers include disrupting radio communications, invisiblity, melting metal and flying at the speed of light.

The Canadian animation studio Nelvana is named for her. She was actually the company’s mascot for their first few years, until they adopted the now-iconic polar bear in 1978. Funny enough, the studio currently co-owns the rights to the character and her comics along with the National Library and Archives of Canada.

Nelvana of the Northern Lights contains examples of: