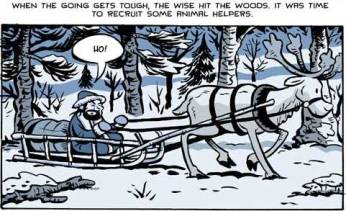 Muktuk Wolfsbreath, Hard-Boiled Shaman originally appeared in short stories in comics created by Terry LaBan (artist of the newspaper comic, Edge City), and then received a longer treatment in a limited-run comic book , published by Vertigo Comics in 1998. Some years after the print comic's run ended due to weak sales, LaBan published another Muktuk story (actually a prequel to the earlier comic), Muktuk Wolfsbreath, Hard-Boiled Shaman: The Spirit of Boo, as a Webcomic. This has since disappeared from the Web, but the Webcomic material and the earliest strips have been collected into a book which is still available in print and PDF forms. So Muktuk Wolfsbreath is best treated as a set of comic books that were once a Webcomic for a while.

These comics are notable for recycling Film Noir tropes in the context of Siberian tribal life. As LaBan put it, "the realization that shamans were kind of like detectives, in that they brought about change by discovering the source of problems, clicked with that classic hard-boiled voice, and, suddenly, there was an idea for a character." The title character and provider of the monologue is a jaded but very capable shaman who takes on supernatural cases, solving them successfully but taking a battering in the process.