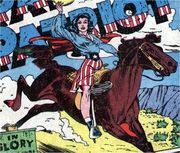 Pat Patriot: America's Joan of Arc is a Superhero from The Golden Age of Comic Books, created by Charles Biro and published by Lev Gleason Publications in Daredevil Comics #2-11.

Patricia Patrios is a former factory worker who has recently been fired. Having gotten a job as an actress playing a female Uncle Sam, Pat ends up busting a smuggling operation in her costume. A reporter learning of the story mishears her name as "Pat Patriot," which Pat takes as her codename in her newfound quest to defend America.

Not to be confused with the mascot for the New England Patriots.