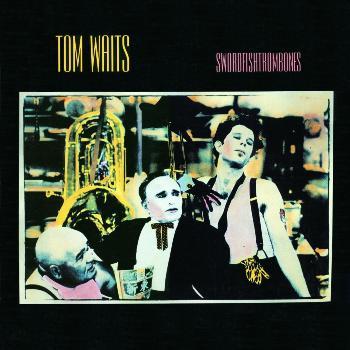 There's a world going on, underground. They're alive, they're awake, while the rest of world is asleep.
Advertisement:

Swordfishtrombones is a 1983 album by Tom Waits. In many ways "Swordfishtrombones" was a New Sound Album. It was the first album he produced himself and the first to mark a radical change in style. He left his "drunk jazzy crooner/pianist image" from his previous seven albums and moved to a more Avant-garde Music style, inspired by carnival music and Captain Beefheart. Seeing that Waits was finally starting to get some success as a singer this was quite a bold move. In fact, the album was already recorded in 1982, but took Waits 13 months before he found a label interested in releasing it.

Swordfishtrombones is well regarded as one of Waits' best albums, thanks to fan favorites such as "Underground", "In The Neighborhood" and "Frank's Wild Years".