Comic Book / He Done Her Wrong 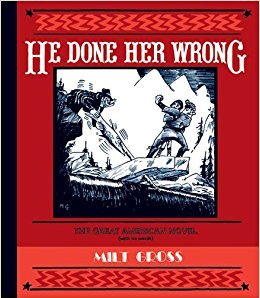 The Great American Novel (with no words)!
Advertisement:

He Done Her Wrong is a 1930 wordless comic/novel drawn and written by cartoonist Milt Gross.

The story is centered on an unnamed young countryman who falls in love with an also unnamed barroom singer. A jealous villain (likewise unnamed) tricks the couple and takes the singer to New York. After a chain of humorous occurrences, the protagonist is reunited with his love and discovers that he is the son of a rich industrialist. While the protagonist and his love settle down and raise a family, the villain is cornered by the angry fathers of five women with whom he has fathered children, ultimately driven into a life of unhappiness.