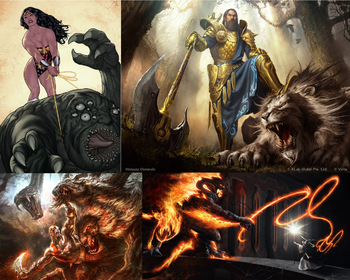 This is how strong the heroes are with only some divine power. You won't believe what the full gods are actually like.note Clockwise from top left: Wonder Woman, Gilgamesh, Gandalf, and Kratos.
"Open your eyes, let's begin.
Yes, it's really me, it's Maui: breathe it in!
I know it's a lot: the hair, the bod!
When you're staring at a demi-god!"
— Maui, "You're Welcome", Moana

These characters tend to exhibit several Stock Superpowers, and if they aren't outright immortal, they're almost guaranteed to be Long-Lived. They may or may not qualify as Humanoid Abominations (who themselves have a high chance of being this character type), and that's if they look humanoid in the first place.

The Anti-Christ is almost always an example. Changelings are also frequently found to be some mix of human and faerie. Divine Parentage, being Touched by Vorlons and a Deal with the Devil are common origins for this type of character. Having a piece of a magical being in you may also count.

One can think of these characters as beings that are partly Made of Magic (or spirit-like beings in general).

As can be derived from the title, part-divine characters are one of the (if not, the) most common examples, which is unsurprising, considering the fact that many gods in mythology have had rather promiscuous lifestyles, and this would naturally extend to modern-day fiction. It should be noted, however, that this trope applies to any mix or midway between "normal" and purely supernatural beings, so this isn't limited to the literal Semi-Divine.