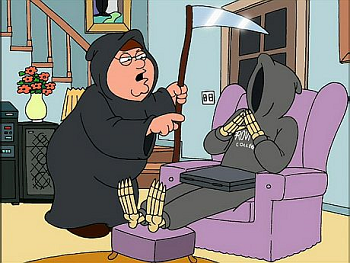 "Either you kill them or I kill you."
"Ye spirit that left thy body at the stroke of midnight,
thou wilt relieve me of my office. For a year thou wilt reap souls."
— The Grim Reaper, The Phantom Carriage
Advertisement:

People die. A lot. At any given time, many souls need shepherding to the afterlife and it falls to The Grim Reaper to get them there, which is a full time job. Occasionally though, Death might need some help taking up the slack.

There are a number of reasons this might happen:

The Grim Reaper has a full time job, and occasionally might want some R&R. But given that people won't stop dying while Death takes a lunch break, there needs to be someone who can pick up the slack. Alternatively, perhaps Death is attempting to teach some wisdom to a naive human about value of life or balancing the scales of life and death or whatever. In any case, the result is the same: someone else takes a shift doing Death's job of helping souls get from A to B.

This is a sub-trope of Subbing for Santa, which describes any situation where a normal person temporarily takes on the role of a mythological figure. That also leads us to Relieving the Reaper's divine sister tropes, God for a Day. This trope may also follow from Death Takes a Holiday, where something happens that stops Death from causing... well, death, and someone else may or may not step up to fill in the vacuum.