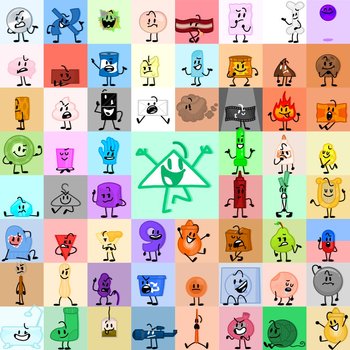 Animated Inanimate Battle is a web cartoon series created by Robert Johnston on his YouTube channel, GatlingGroink57, inspired by another web cartoon called Battle for Dream Island. It's one of those standard object shows... Except it's hosted by a demigod.note We're talking about Oodle.

It started on April 15th, 2018 with its self-titled Pilot, before being removed from YouTube for almost two years. The pilot returned on April 1st, 2020, and eventually got its first proper episode on May 20th, 2020 with the release of "An Ice Beginning." The entire show is animated in Microsoft Powerpoint and uses Paint.NET for character and prop design which is really impressive considering how good its quality is.

The plot follows a group of sixty living objects who live in the Blank Slate, a yellow-and-white gradient void with virtually nothing inside aside from them and a couple of other non-living objects. This uneventful life is interrupted by the entrance of Oodle the Doodle, a Semi-Divine inter-dimensional triangle guy looking for fun. He came into the Slate through a portal and ended up in a comatose-like state. After the objects wake him up, they show him all the fun things to do in the Blank Slate. Oodle is less than impressed by this and begins to leave for a new dimension. However, he is convinced to stay by one of the objects (Leek) and decides to make his own fun by hosting a game show with said objects as contestants where the winner receives anything they want.

Episodes of Animated Inanimate Battle can be found here

This cartoon contains the following tropes:

Bone: Oh, it's nothing Oodle. It's just that no one here likes me.
Oodle: ...Why?!
[Bone briefly looks at his teammates backing away from him]
Beat
Bone: I don't know!