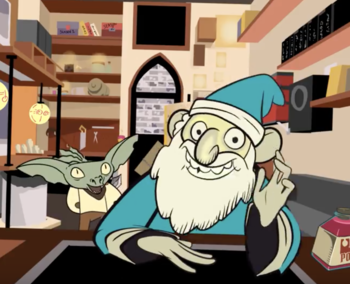 He probably won't need the healing potion... Probably. note Zee himself in the foreground, with Gabriella the Goblin in the background
"Haha, it was an animated Spellbook the whole time!"
— Zee Bashew

A series created by YouTuber and animator Zee Bashew meant to explain the intricacies of Dungeons & Dragons spells, although his definition of "Spell" can be rather loose.

The first episode was released in February 2018, and it has since then come out 21 episodes, not counting a few spinoffs and specials. Each episode takes a look at one or more spells from fifth edition Dungeons & Dragons, often including a short story about a situation where Zee or one of his players used the spell, to varying effect. The series is narrated by the wizard Bashew, acting as an avatar for Zee himself, though he's sometimes replaced by different characters depending on the story being told. More recently, he's just been playing himself as a cashier at a card shop (who has to deal with a wargaming regular who either tries to correct him or gets angry at his advice).

While the spells themselves are the main draw of the series, he has also made a few spinoffs and specials, though they are rarely as consistent as the Spellbook. These includes the Cold Road Campaign diaries, an illustrated story that happened in a game, the Animated Sword, like the animated Spellbook, but for strategies and ideas that often come up in D&D, and Druidic Tome, a series focused solely on druids. For the sake of simplicity, they're all on this same page.

Spells and Magic
Other Mechanics

Advice for DMs and Players

, while you can donate to his Patreon for more animations Here