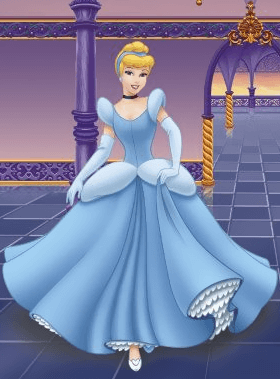 You know, in the actual movie, her dress is silver...
Wolf looked up at her, his eyes still bright. "An excellent choice, Pol," he said admiringly. "Blue has always been your best color."
"Do you like it?" she asked, holding out her arms and turning almost girlishly so that they all might see how fine she looked.
— Pawn of Prophecy, David Eddings
Advertisement:

Blue is a common color to represent femininity. Thus a girl or woman wearing blue is a sign that she is fair and gentle.

This could have started at least as far back as ancient Greece and Rome, and why the Virgin Mary is often depicted in a blue robe. The logic was that blue symbolizes peace, serenity, kindness, and other such aspects that were considered womanly virtues. (In the Mediterranean, it was also a sign of high rank, as the dye/paint color had to come from indigo, woad, or lapis lazuli which must be imported from a great distance and was therefore quite expensive.)

Blue has other meanings, such as sadness and loneliness. These can overlap with this trope (as in representing both femininity and sadness). Or that she is gentle (with blue representing peace and serenity). This can apply to any feminine woman at any age, some more than others, like a Winter Royal Lady.

Also, blue is an ideal color for all skin tones, as human skin has a base color of orange.

Often overlaps with Water Is Womanly.