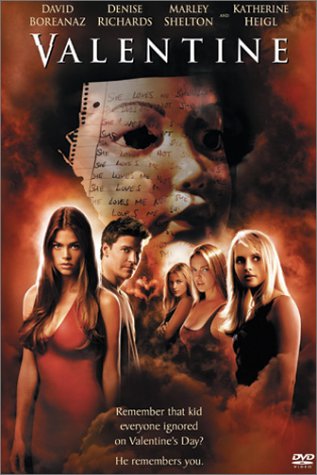 One of the contemporary Slasher Movies that rode on the coattails of Scream (1996)'s success, e.g... I Know What You Did Last Summer.

At a junior high school Valentine's Day prom in 1988, a bespectacled loser named Jeremy Melton asks several girls (Shelley, Lily, Paige and Kate) to dance, only to be cruelly shot down—except for the latter, who politely rejects him. Another girl, Dorothy, who at this stage is a little chubby, accepts his offer. But when some boys spot her and Melton making out, she claims he was assaulting her, prompting them to publicly strip and beat him, after which he is sent to a reform school.

Thirteen years later, the girls are all grown up and played by Katherine Heigl, Jessica Cauffiel, Denise Richards, Marley Shelton and Jessica Capshaw respectively. They're now dealing with various boyfriend issues, and Dorothy has since slimmed down. As Valentine's Day approaches, they start receiving threatening Valentines Day cards. Then, a killer dressed in a black coat and cupid mask shows up and starts offing them one by one. Is it Melton, come back for revenge, or someone else?