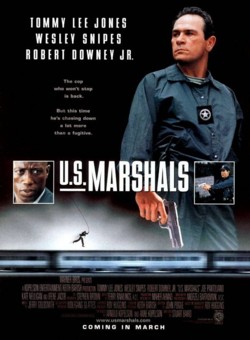 U.S. Marshals is a 1998 Spin-Off to The Fugitive (1993), directed by Stuart Baird. This was his second film, following Executive Decision (1996). Tommy Lee Jones returns to his role of Marshal Samuel Gerard. This time the "antagonist" is Wesley Snipes, and Robert Downey Jr. also co-stars.

At the start of the film a man gets involved in a traffic accident and arrested. He is identified as Mark Roberts (Snipes), a federal fugitive wanted for a double homicide in a Manhattan parking garage. He and other prisoners are transported to New York City by plane. On board is Deputy U.S. Marshal Samuel Gerard, an unwelcome assignment. Gerard was recently involved in a publicized incident of police brutality, and in order to avoid bad publicity for the service, his boss has him transporting prisoners for a while. In mid-flight, one of the prisoners pulls out a concealed weapon and fires at Roberts. He misses but the bullet travels through a window and depressurizes the cabin of the plane, resulting in a plane crash.

Once Gerard recovers, he notices a single prisoner unaccounted for: Mark Roberts. Worse, the Diplomatic Security Service (DSS) informs the Marshals that "Roberts" is actually Mark Sheridan, an operative of their service who murdered his fellow agents while selling state secrets to unidentified agents of another country. None of this really matters to Gerard, who really just wants to catch him. Meanwhile, Sheridan is heading to New York City on his own, intent on clearing his name.

Things become significantly more complicated almost immediately, as it turns out there's a lot more to the crime, a lot more to Sheridan, and a lot more at stake than anyone thought...

Tropes seen in US Marshals include: