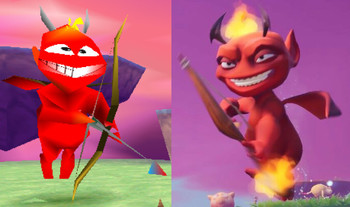 Sowing hatred and puncture wounds since 1998!note The Cupid enemy from Spyro the Dragon (1998) and Spyro Reignited Trilogy.
Hawk Moth: Dark Cupid, I am Hawk Moth. I can give you the power to shoot your arrows, pierce love and impale friendships. But there is something you must do for me in return.
Lê Chiến Kim/Dark Cupid: No love affair or friendship will escape my fury. No one will love again!
— Miraculous Ladybug, "Dark Cupid"
Advertisement:

In the times of Ancient Rome, Cupid (and by extension, his Greek-counterpart Eros) was a god of love and an embodiment of sexual desire. He was armed with a bow gifted to him by his father Mars/Ares and a quiver of arrows; gold arrows that induced love, lead arrows that destroyed it. He was also a terrible shot, and would often be the blame for madness and chaos brought on by raw, uncontrollable desire among the mortals. With cultural osmosis, Cupid as an icon has endured the test of time in the form of an angel and flying baby that personifies love.

With every angel, there are its Evil Counterparts, with much more malevolent versions of the cupid portrayed as a Fallen Angels or even as all-out demons. Like their heavenly counterparts, Fallen Cupids have bows and arrows too, but they aren't nearly as wholesome. Instead of sacred couplings, perhaps they elicit more carnal desires like the Horny Devils that they are, portraying them like the Greco-Roman Cupid of old in a more modern context. The love they inflict might be a form of Mad Love, and might even ensure that Love Hurts in the end just for the satisfaction of watching hearts break. They might manifest as a form of Jerkass Genie, granting a mortal's wish for love and have that love be an annoying, corrupting thing that brings out the worst in all parties. They could carry nothing but lead arrows and destroy love, or maybe they can pierce the heart of a person and they bleed to death.

Kim is turned into Dark Cupid, a Fallen Angel-esq villain hellbent on destroying Valentine's Day for all of Paris.

Kim is turned into Dark Cupid, a Fallen Angel-esq villain hellbent on destroying Valentine's Day for all of Paris.