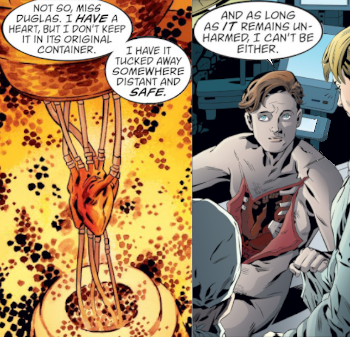 Frodo: But he was destroyed. Sauron was destroyed.
Gandalf: No, Frodo. The spirit of Sauron endured. His life force is bound to the Ring, and the Ring survived. Sauron has returned.
— The Lord of the Rings: The Fellowship of the Ring
Advertisement:

A container or object which holds all or part of a person's soul (or life, or heart) outside of their body; this makes that person immortal and/or invulnerable. The only flaw is that the Soul Jar is now their Achilles' Heel. Usually, they make sure it is very well protected (the word phylactery, the common name for this kind of container from Dungeons & Dragons fame, actually comes from Ancient Greek phylacterion, form of phylássein, [φυλάσσειν] meaning "to guard, protect").

Typically, Soul Jars work in one of two ways:

The Trope Namer is Might and Magic, where necromancers and evil wizards transfer their souls into literal jars during the spell to transform themselves into liches.

The trope itself, however, is Older Than Dirt - it appears in the ancient Egyptian Tale of Two Brothers

, where one of the brothers survives his death by hiding his heart on a tree for the other to restore later.

Of course despite the name it's not necessarily a jar; common examples are paintings, gems and still beating hearts; and in mythology and fairy tales, eggs or trees. It does not necessarily host a soul, either; sometimes an object is tied to a character's immortality, but does not actually contain the character's soul. The device is usually used by liches, and is invariably associated with them in folklore.

Tends to overlap with Synchronization whenever two or more people's lives are linked to each other.

Compare Brain in a Jar and Brain Uploading for science fiction equivalents. See also Fighting a Shadow, Animating Artifact and Fantastic Fragility. Not to be confused with Crystal Prison, where a person is trapped in a gem.