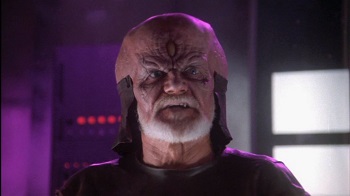 I have come... to save your soul.
—Soul Hunter

Sinclair and Ivanova have just welcomed Dr. Stephen Franklin, their new Chief Medical Officer, to the station when a message comes from C&C. The jumpgate opens and a single unidentified vessel comes through. It has been heavily damaged and is coasting out of control, on a collision course for the station. Sinclair heads out in a fighter to try and grapple the ship and bring it aboard. If he is unable to, they'll have to destroy it. Ivanova readies the defense grid as he launches. After several attempts, he successfully snags the ship and heads for the docking bay.

Sinclair heads to Medlab and runs into Delenn, who offers to help identify the occupant. As soon as she sees him, though, she grabs Garibaldi's gun and tries to kill him. Garibaldi and Sinclair wrestle the gun away from her, but she insists they kill the newcomer, calling him a "Soul Hunter," and saying his presence means Tonight, Someone Dies. Later (in her office) she explains that they are drawn to the moment of death so that they can collect the souls as they pass.

The Soul Hunter begins to awaken, seeming to hear a lurker in Downbelow who is running a gambling stall. Franklin is startled to find him on his feet. Attempting to communicate reveals the Soul Hunter knows English ("I have been to your world before.") and he begins to speak in cryptic phrases about something that seems about to happen. The gambler runs afoul of one of his customers, who realizes he's cheating and starts chasing him. As the Soul Hunter seems to narrate in riddles, the gambler tries desperately to escape, but his patron catches up to him and stabs him in the chest. As the gambler is rushed to Medlab, the Soul Hunter continues his unsettling monologue. All attempts to save the man's life fail and he dies. Franklin turns back to the Soul Hunter who simply says, "Gone now."

Sinclair demands to know how he knew the lurker was dying. The Soul Hunter does not respond for a while, until Sinclair calls him a thief. The Soul Hunter jumps up and begins protesting he is not a thief. He then begins explaining the purpose of a Soul Hunter while expressing disdain for Minbari beliefs.

Sometime later, Delenn comes to see him. She demands to know where his "collection" is. He simply says it's safe. She promises that before he leaves she will tear his ship apart until she finds it. He suddenly recognizes her as Satai Delenn of the Grey Councilnote the nine elected rulers of the Minbari race and asks why she is here. Rather than answer, she simply leaves. Right after, he collapses, drawing the guard into his suite, then knocking him out and escaping.

He gets back to his ship and retrieves his collection, a group of glowing orbs which float in the air before him. He tells them he knows why they have come here. He then goes to the local crime boss, N'Grath, and buys information on all the secret places on the station.

Meanwhile, another Soul Hunter arrives, and insists on coming aboard. When he meets with Sinclair he says the first Soul Hunter is a "disturbed" individual, who had failed to save some high-profile souls. Now instead of waiting for worthy souls to die, he simply kills them and collects their souls that way. As he tells them this, the first hunter arrives in Delenn's diplomatic suite. He drags her down to Downbelow and straps her to a large table, with a device that will apparently capture her soul once she dies—which is to be accomplished by another device that drains her blood to kill her without trauma.

Sinclair figures out who the Soul Hunter is after and tells the second one to use his sense to locate Delenn. He finally locates them after Delenn has lost consciousness. The Soul Hunter tries to stop him, telling him that Delenn is Satai and that the Minbari are using him. As Delenn approaches death, the other souls block the hunter, allowing Sinclair to turn the machine on him, sucking his soul into one of his own orbs.

In Medlab, Delenn is recovering. She wakes up just long enough to say they were right about Sinclair, but falls asleep before she can finish. Later Sinclair looks up the word Satai, and wonders why such a high-ranking individual would be sent as an ambassador, but decides it can wait.

As the second Soul Hunter prepares to leave, he assures Sinclair that Delenn will live. Sinclair warns him that his kind will not be allowed aboard in the future. Just before he leaves, the hunter asks where his brother's collection is, but Sinclair just says to consider it one of life's mysteries. The mystery in question is Delenn, who is destroying the orbs one by one and releasing the contained souls.