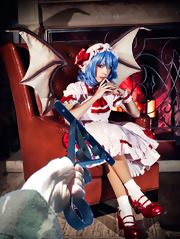 The cover of FREAKIN GENSOKYO.
Advertisement:

is a Touhou Project fanfiction, written by SKOOLATOON

. It is a Self-Insert fic where the Cloudcuckoolander main character, who goes by the name of Brad (with no last name), wakes up in a forest in Gensokyo near the Scarlet Devil Mansion. Upon doing so, he immediately breaks the fourth wall and checks his surroundings. Realizing the urgency of the situation, he quickly tries to build a shelter in order to survive the incoming night.

Brad romps around Gensokyo, having fun, saying silly things, annoying people and accomplishing relatively little, while gradually gathering friends and stronger plant hangers. He describes almost everything as "fluffy", because it's just that kind of fic. Brad's evil friend Matt, based on a real-life chum of the author, joins in after a couple of dozen chapters to wreak havoc and murder innocent people, until the real Matt leaves the production team due to creative differences.