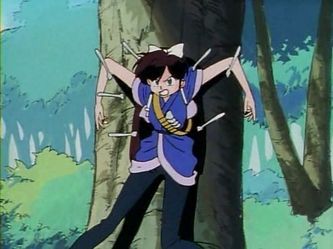 A fork is fine too.
Either by accident or design, a swarm of sharp objects (such as knives, arrows or axes) are hurtling toward the character. They somehow pin the character to the wall without actually cutting the character (one by each side, arm, leg, etc.). One final object — and it's always the final one — may land disturbingly close to the head or, in comedic cases, the crotch. Sometimes, especially in animated versions, the character has to go through increasingly complex contortions to make sure they don't get hit.
Advertisement:

This trope is frequently used in animated media meant for younger viewers to show the target has been incapacitated without injuring or killing them.

Their clothes may or may not be affected; sometimes they really are pinned in place, and other times they can simply walk away, leaving a noticeably person-shaped silhouette of projectiles on the wall.

Contrast William Telling. See also Pinned to the Wall. Related to the Inverse Law of Sharpness and Accuracy and, if the target is pinned, an inversion of the Inverse Law of Utility and Lethality. If intentional, usually requires Improbable Aiming Skills. Usually the end result of a Knife-Throwing Act.