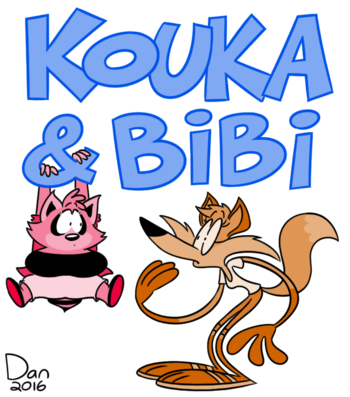 From left to right: Kouka and Bibi. Or is it Bibi and Kouka? Who knows?
A 16-minute animated short film by webcartoonist Dan Variano, Kouka and Bibi note episode name: "Murder in the Big City" is an Affectionate Parody of the Silent Zany Cartoon, set in a Film Noir universe and starring the titular characters — one a tall, lanky fox, the other a short, stout raccoon. (It's never shown which one has which name.)

While taking pictures of each other in the city, Kouka and Bibi stumble across a murder victim in an alleyway. They don't know why he was killed, and the cops are no help — they've got to find out whodunnit by themselves! Plenty of hilarity, classic animation tropes, and subversion ensues.

You can watch the cartoon here.

Kouka and Bibi contains examples of: