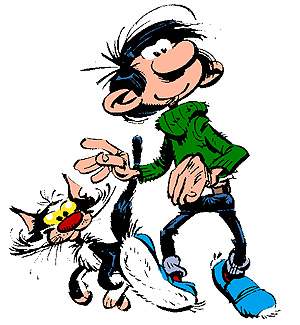 The most iconic goofball of Franco-Belgian comics.
Advertisement:

Gaston Lagaffe is arguably one of the best-known and most well-liked characters of the Franco-Belgian Comics school. The character first appeared in Spirou #985 (February 28, 1957). The creation of André Franquin, who wanted to come up with an Anti-Hero after working for years on the series Spirou and Fantasio, Gaston Lagaffe is an office drone and errand boy employed by a fictional version of the Dupuis publishing company.

But the point is that he never gets any work done, instead preferring to spend his work days cobbling together mad contraptions, playing music on Bizarre Instruments, keeping a range of animals and plants, conducting chemical experiments that usually end with the explosion of his makeshift lab or simply sleeping. This frequently leads to him butting heads with his neurotic boss Fantasio note  originally a main character in the aforementioned Spirou And Fantasio, who is charged with the impossible task of getting Gaston to work. Later in the comic's run, Fantasio's role was taken over by the equally hot-tempered Léon Prunelle. Gaston has a presumably platonic but reciprocated relationship with fellow Dupuis employee Mademoiselle "'Moiselle" Jeanne.

While Gaston's misadventures have been popular all over Europe, the comic never saw an official English translation until 2017, when Cinebook started publishing the albums, under the name "Gomer Goof."

Despite André Franquin's refusal to let his beloved work be adapted into film, a French movie was made in 1981, Fais gaffe à la gaffe! (Watch out the goof!), which was Gaston Lagaffe in all but name. Another French Live-Action Adaptation movie was made and released in April 2018, this time without rights issues.