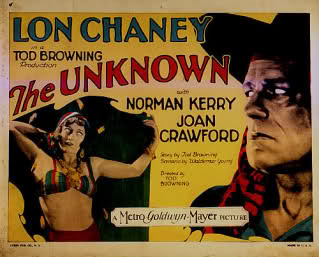 The Unknown is a 1927 American silent horror film directed by Tod Browning and featuring Lon Chaney as carnival knife thrower Alonzo the Armless and a young Joan Crawford as the scantily clad carnival girl he hopes to marry.

Chaney plays a carnival performer known as the "Armless Wonder," who performs near-miraculous stunts with his bare feet. In fact, he is in possession of both his arms, but keeps them strapped to his side to maintain the illusion of being limbless. Alonzo's beautiful assistant Nanon (Crawford) has a pathological fear of being touched by any man. This leads Alonzo to believe that he is attractive to Nanon so long as his keeps his arms hidden. Halfway through the film, Alonzo murders the circus manager—a crime witnessed by Nanon, who was only able to glimpse Alonzo's distinctively mutated thumb. To cover up his crime, and to make himself the perfect mate for Nanon, Alonzo blackmails a doctor into amputating his arms. Upon returning to the carnival, the now-genuinely armless Alonzo learns to his horror that Nanon has overcome her aberration of being touched, thanks to handsome circus strong man Malabar (Norman Kerry). Enraged, Alonzo plots to kill Malabar in a horrible fashion...but guess who ends up seriously dead?

The Unknown contains examples of: