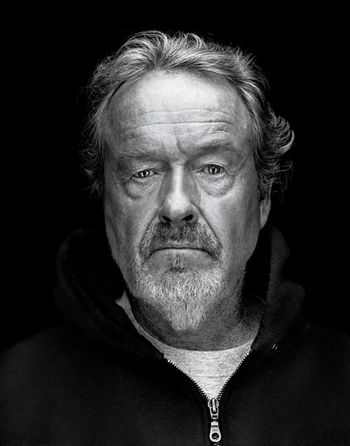 "I'm a yarn teller. My job is to engage you as much as I can and as often as I can."
Advertisement:

Sirnote he doesn't use the title as it makes him "sound like an old man" Ridley Scott (born 30 November 1937) is a British director.

A highly accomplished commercial director at his beginnings (he did some of the early Apple ads), he would rapidly become an auteur filmmaker. Known for an obsession with visual detail rivaling Stanley Kubrick, if not Alfred Hitchcock. Several of his early works helped establish the popularity of the Used Future trope, and he is also one of the (if not the) most prominent directors of epic period pieces since The '90s. He has worked with an incredibly wide variety of genres and budgets, yet somehow maintains his own special touch through it all.

He is the older brother of late director Tony Scott, and the father of Jake, Jordan and Luke Scott, all directors.

This director's films contain examples of these tropes: