Film / Up the Academy 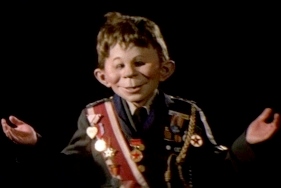 Once upon a time, there was a Publisher of a magazine. He was a happy man, publishing his magazine. But one day, he said, "Wouldn't it be swell if they made a movie and my magazine sponsored it?! It would help sales! Isn't that a wonderful idea?" All of his Yes-Men agreed that it was a wonderful idea, and so the smart people in Hollywood made a movie, and the magazine sponsored it. But did the Publisher live happily ever after? Not on your life! Because he overlooked one little thing while summoning up images of millions of people rushing to see the movie and then rushing to newsstands to buy his magazine. The thing he overlooked was to find out if the movie was any good! Well? Was it? If you've seen it, you already know the answer to that question!
— From the introduction to the Mad Magazine parody of this film, "Mad Magazine Resents Throw Up The Academy"
Advertisement:
SAY IT AGAIN!
In 1980, MAD, taking note of National Lampoon's success with Animal House, decided that they, too, wanted to get in films. Which would make sense, considering that Mad had been around longer than National Lampoon as a satirical magazine, and a lot of film critics who wrote negative reviews of movies the magazine satirized noted that the spoofs were more entertaining than the movies themselves.

Thus, Up the Academy was produced. The movie stars Ron Leibman (who had his name removed from the credits despite being the main antagonist) as Major Vaughn Liceman, a semi-fascist instructor at a Military School where a group of teen misfits get into trouble, lust over Barbara Bach (playing the armaments specialist), and try any way they can to buck the system and turn the tables on Liceman.

The movie's raunchy humor was a sore point for many, including the Mad staff, and fans of the magazine. Mad publisher William M. Gaines paid $30,000 to have all references to the movie removed from television broadcasts and home video releases after it was a box office failure. However, the original version of the movie was put back into syndication and released on DVD after Time/Warner purchased Mad.

If you'd like to see for yourself right from the source how the "gang of idiots" at Mad really felt about this film, you can see Mad Magazine Resents Throw Up The Academy here.

Up The Academy was directed by Robert Downey Sr. A young Ralph Macchio plays one of the main characters. Antonio Fargas plays the soccer coach, and a young Robert Downey Jr. appears as one of the boys on the soccer team. Rick Baker designed the mask for Alfred E. Neuman, who appears during the opening and ending sequences.