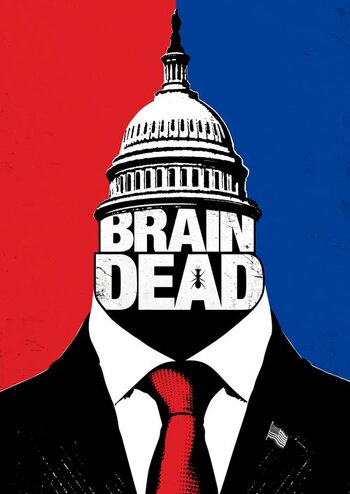 BrainDead is a satirical sci-fi/horror/political thriller/dramedy series created by Robert and Michelle King (The Good Wife) and executive produced by Ridley Scott. It premiered on CBS in the summer of 2016.

Laurel Healy (Mary Elizabeth Winstead) comes from a family of politicians, but she couldn't care less about politics and is more interested in her career as an aspiring documentary filmmaker. But when funding for her newest project goes south, her father offers to pony up $200,000 to her on the condition that she takes a six-month job in the office of her brother, Senator Luke Healy (Danny Pino).

But things get bizarre when a meteor is discovered in Russia and is sent to the United States, because this meteor actually houses a large colony of ant-like aliens who seem to have a penchant for both relieving important people like Senator Red Wheatus (Tony Shalhoub) of their brains and taking control and setting the brains of others to explode, lest they get too suspicious of the Space Bugs' plot.

Slowly, but surely finding out the truth, Laurel finds herself going to war against this extremely pesky Alien Invasion, with the fate of the U.S. government and pretty much the rest of America hanging in the balance. Can she do it without literally losing her head, be it by hijacking or straight-up exploding?

Has absolutely NOTHING to do with the Peter Jackson movie of the same name.

Sadly, it was canceled after one season, though the plot was left largely wrapped up, albeit open for more.