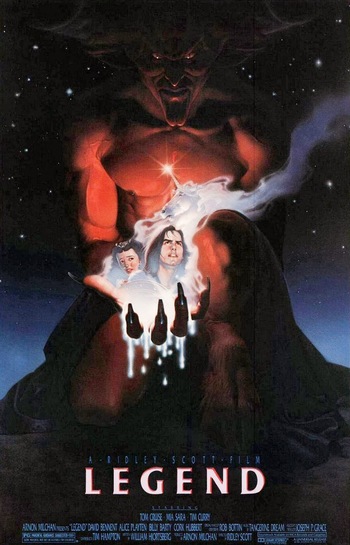 "I require the solace of the shadows and the dark of the night. Sunshine is my destroyer."
— Darkness
Advertisement:

Legend is a 1985 fantasy/adventure film directed by Ridley Scott, starring Tom Cruise, Mia Sara, Tim Curry, and Tim Curry's massive pair of horns. It is part of The '80s fantasy boom in film, sharing many of the same elements as its contemporaries. The movie was a flop at the time, but is now a bit of a Cult Classic, mainly for its creative visuals and Rob Bottin's masterful practical effects. Whatever other problems it has, this movie looks great.

The Lord of Darkness (Curry) plots to cover the world in eternal night. He sends his servant, the goblin Blix (Alice Playten), to kill the light-bringing unicorns and take their horns. The unicorns only appear before the pure of heart, so a lure must be used. Enter Jack (Cruise) and Princess Lili (Sara), pure denizens of the forest. When the stallion is killed, Jack and Lili are separated as snowstorms envelop the world. She and the mare are captured by the forces of Darkness, and he must band together with the woodland fairies to rescue her.

The direct inspiration for The Legend of Zelda, making it the second Ridley Scott film to inspire a major Nintendo franchise (the first being Alien, which inspired Metroid).