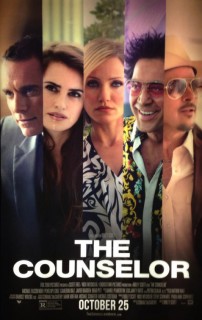 The Counselor is a 2013 crime thriller directed by Ridley Scott and starring Michael Fassbender, Penélope Cruz, Cameron Diaz, Javier Bardem, and Brad Pitt. It is notable for being the first original screenplay written by novelist Cormac McCarthy (of No Country for Old Men and The Road fame) to be produced.

The film follows an attorney (Fassbender) who gets in way over his head when he tries to make money to pay for his upcoming marriage to the beautiful Laura (Cruz) by striking a deal with Mexican drug lords, including their emissary, Reiner (Bardem) and his girlfriend Malkina (Diaz).

The film was released on October 25. Trailers can be seen here

and (along with a synopsis and character summary) here

. A curious thing about the film poster is that the actors are seen without their names listed at all. A way of avoiding the Misplaced-Names Poster, or are the actors just that popular?

The Counselor contains examples of: