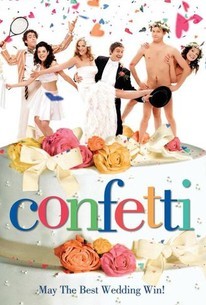 Confetti is a 2006 romantic comedy, featuring such well known comic actors and comedians as Jimmy Carr, Olivia Colman, Martin Freeman, Meredith Macneill, Stephen Mangan, Jessica Stevenson and Robert Webb. Wedding magazine Confetti decides to hold a "Most Original Wedding" competition, with the prize being a brand new house. The three couples are Matt and Sam(Freeman and Stevenson) who want to hold an MGM musical wedding, Josef and Isabelle (Mangan and Macneill) a competitive pair of tennis players, and Michael and Joanna (Webb and Colman), who surprisingly wish to have the entire ceremony completely naked. The film is performed mockumentary style as the couples try to plan their weddings and strive to overcome the various trials tribulations that occur.