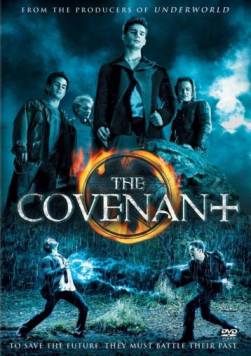 Four teenage boys, Caleb, Pogue, Reid and Tyler, have magic powers inherited from witches in colonial New England. When they're not jumping or driving off cliffs, the boys attend Spencer Academy. At the start of the film, each boy is awaiting his 18th birthday, when he will "ascend" and increase in magical strength. But there's a catch: the magic is so addictive, it's "seductive", and the more it's used, the more the boys' bodies degrade and age prematurely. Enter Sarah (Laura Ramsey), Caleb's love interest, and Chase, a mysterious new transfer student. You can imagine what follows.

The Covenant contains examples of: