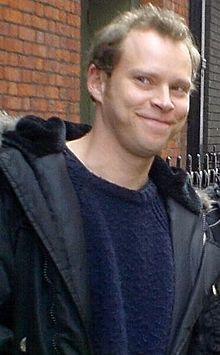 "I can't imagine getting bored with comedy or thinking comedy is beneath us suddenly."
Advertisement:

Robert Patrick Webb (born 29 September 1972) is an English comedian, actor and writer. He's one half of the double act Mitchell and Webb. He's Webb. David Mitchell is Mitchell. Now you know.

His 2017 memoir, How Not To Be A Boy, revealed he's bisexual. Since 2006 he's been married to fellow comedian and actress Abigail Burdess. They have two daughters together.