Stuck in a Chimney 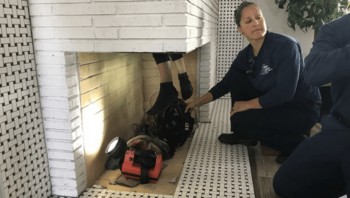 Sometimes a character will attempt to enter a building by the chimney. Or they might just fall in. Either way, one outcome of this situation is that they get wedged in the chimney and cannot get out.

In comedic works, expect hilarity to ensue as the stuck character attempts to conceal their presence, or explain what they are doing there, and various attempts are made to extract them. In darker works, the character could be seriously injured, or die. In a Black Comedy, the characters might find the remains of someone who died in the chimney years ago.

Can be a Surprisingly Realistic Outcome.

One possible outcome of a Chimney Entry. Subtrope of Help, I'm Stuck!. Sister Trope to Smokestack Drop and Stuck in the Doorway. A frequent fate for Santa Claus.