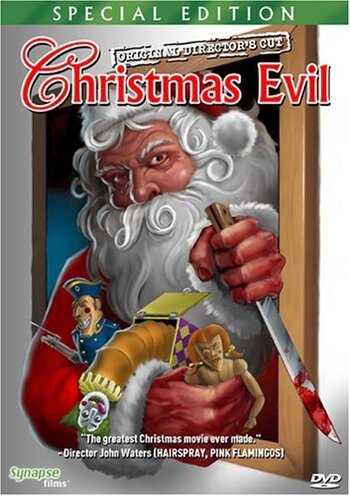 I'll be the perfect Santa!
Better watch out... better not cry... or you may die!
— One of the taglines for the film
Advertisement:

Christmas Evil (aka Terror in Toyland and You Better Watch Out) is a 1980 American horror film written and directed by Lewis Jackson, starring Brandon Maggart, Dianne Hull, and Jeffrey DeMunn.

As a young boy, Harry Stadling was mentally scarred when he found out that Santa Claus wasn't real. Years later, he's grown up to become a Christmas-obsessed Manchild who works at a toy factory, surrounds himself with holiday decorations and songs all year long, and even keeps his own private list of "nice" and "naughty" children in his neighborhood. He eventually decides to take on the role of Santa, giving presents to children and hurting the naughty.