Film / City of the Living Dead 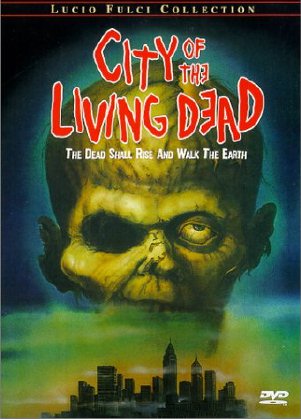 In the town of Dunwich, New England, a priest commits suicide, thus opening one of the gates of hell. This causes the dead to rise and the priest's apparition to appear and haunt people around the town. The priest's suicide is detected at a seance by Mary Woodhouse (Catriona Maccoll). The gate of hell must be closed before All Saints Day, otherwise the dead around the world shall rise. Mary teams up with reporter Peter Bell (Christopher George) to go the town, investigate, and close the gate.

The film would most likely be unknown but for two scenes of infamy. The first is of a girl before whom the ghost of the priest appears, causing her to vomit up her intestines whilst weeping blood. This effect reportedly required the actress to swallow several yards of sheep intestines whole... heavens above; the things one does for show business. (However, conflicting reports hold that the head consisted of a bust). The second is of a man drilling through another man's head with an electric drill, until the end protrudes from the other side, after he catches him sleeping with her daughter.

The film is the first in Lucio Fulci's unofficial "Gates of Hell" trilogy (with the others being The Beyond and The House by the Cemetery) and the second of four of his to feature zombies (with Zombi2 being the first and the aforementioned remaining two Gate of Hell films being the third and fourth). Also notable is the fact that it managed to escape inclusion on Britain's Video Nasties list; despite the three other films being stuck on it and despite the two above-mentioned scenes that practically begged to be cut, it's always been available in the UK.

"The tropes shall rise and walk the Earth":