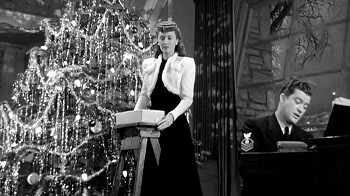 Christmas in Connecticut is a 1945 romantic comedy film directed by Peter Godfrey and starring Barbara Stanwyck.

Jefferson Jones (Dennis Morgan) is a sailor who survived 18 days on a life raft after his destroyer was sunk by a German U-boat. Through plot contrivances, he gets an invitation from magazine publisher Alexander Yardley (Sydney Greenstreet) to spend Christmas at the home of Yardley's most famous writer, Elizabeth Lane (Stanwyck). Lane is sort of a Martha Stewart for The '40s, writing a column about her life on her bucolic Connecticut farm, tending to her husband and baby, cooking, sewing, knitting sweaters, and basking in all the other joys of happy homemaking.

The only problem is that Lane's image is a giant hoax. She lives in a Manhattan apartment, she has neither husband nor baby, and she can't cook—all of her recipes come from her good friend and professional chef Felix (S.Z. Sakall), a Hungarian refugee. She is panic-stricken at the news that Jones and Yardley are coming to stay at her nonexistent home and meet her nonexistent family, but fortunately her good friend and romantic suitor John Sloan (Reginald Gardiner) does have a farm in Connecticut. They elect to have a quickie wedding and borrow a neighbor's baby, but Jones and Yardley arrive before the wedding is performed. Hilarity Ensues.

Arnold Schwarzenegger, of all people, directed a Made-for-TV Movie remake that starred Dyan Cannon, Kris Kristofferson, and Tony Curtis. It aired on TNT in 1992.