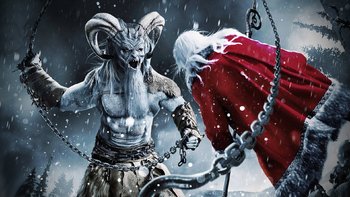 A Christmas Horror Story is a 2015 anthology horror film directed by Grant Harvey, Steven Hoban, and Brett Sullivan. It premiered on July 20, 2015 at the Fantasia International Film Festival and had a limited theatrical release on October 2, 2015, along with a VOD release. The film is a series of interwoven stories tied together by a framework story featuring William Shatner as a radio DJ.