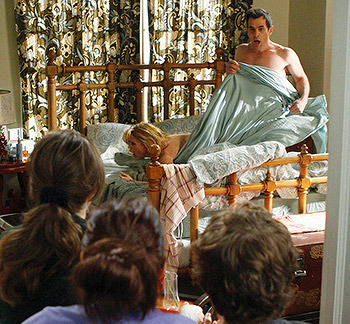 Pictured: mental scarring.
"Hey, champ. I, uh, wanted to talk to you. You know, about what you just saw. Because things aren't always what they appear. Sometimes, when someone is choking, you have to get behind them to give them the Heimlich. This was not that. I was not helping your mother with a leg cramp, I was not giving her a lying-down hug, I was not helping her look for her contacts. I was plowing, Steve."
— Stan Smith, American Dad!
Advertisement:

Someone, usually a child, is wandering in his or her house and walks into two people having sex. (Nobody ever has a room with a lock in fiction.) Most of the time it's the parents. This can lead to A) the parents giving that one discussion we all mention vaguely, B) the resulting Parental Sexuality Squick leaving the unfortunate soul to be shell-shocked for a while, C) being very funny, or some combination of the three.

Its psychological term is the Primal Scene, coined by none other than Freud.

Naturally, media always plays this as a traumatic experience, rather than the person just figuring it is natural, quickly realizing such, or just not understanding why mommy and daddy are playing leap-frog naked (and then after looking back on it all, will quickly apply Brain Bleach to forget about it).

And of course, all "child" characters, no matter how old, don't understand sex. Characters identified to the audience as "teenagers" will simply be horrified. This rule applies to almost every example, despite the fact that most children (even 8- or 9-year-olds) will know what they interrupted in Real Life. That said, most offspring are conditioned not to think of their parents in sexual ways, so even if the act itself isn't the big deal, seeing their parents do it can be considered innately disturbing for some.

This may involve Right Through the Wall if the child hears their parents having sex. Sex in a Shared Room is the most damaging and disturbing form of this, when it actually occurs with the child right there and is usually intentional, in which case it may function as a Freudian Excuse.

See Caught with Your Pants Down for the single-player version; for the reverse scenario with parents walking in on their adult child getting frisky, see Parents Walk In at the Worst Time. A subtrope of Interrupted Intimacy.

BoJack walks in on his dad and a human woman getting it on in his office.

BoJack walks in on his dad and a human woman getting it on in his office.