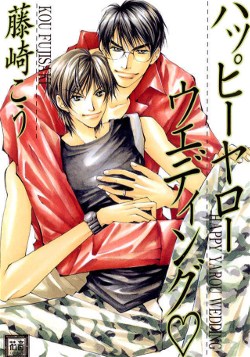 When Professor Akira Todou steals his lunch box, Yuuhi, a hot-headed but cold-hearted student, unwisely punches him. He assumes Todou is taking him to the police, but instead Todou suspiciously drags him to his house. To Yuuhi's surprise, he demands Yuuhi become his housekeeper and nanny to his son Shouta—a job Yuuhi quickly comes to love. After some drunken fumbling Yuuhi is startled to realize his feelings for Todou, while Todou assumes he's upset and tells him it was an accident. This being the opposite of what Yuuhi wants to hear, he disappears for awhile, ignoring all of Todou's pleas to forget it. Eventually Shouta runs off to Yuuhi's place and Todou seizes the opportunity to sort things out. They get together to Shouta's great delight.
Advertisement:

Another obstacle arises with the appearance of Todou's younger brother, Kazuki, who is obnoxious, homophobic, and determined not to leave until Todou agrees to an Arranged Marriage. After both brothers go too far when Kazuki molests Yuuhi, Todou leaves to give Yuuhi space and to confront his father about the marriage—which turns out to be for Kazuki rather than himself. In the meantime Yuuhi, who thinks things are over with Todou, and Kazuki, who thinks Yuuhi is apathetic about it, end up coming to blows. Yuuhi gets knocked out in attempt to protect Shouta when he runs between them, an action which helps change Kazuki's mind about homosexuals. Having rushed to the hospital, Todou responds to Yuuhi's pessimism by proposing and reveals that their separation was in part so he could arrange to get Yuuhi put on his family register. Yuuhi, of course, accepts and they all live Happily Ever After.note until Fujisaki decides to do a sequel anyways