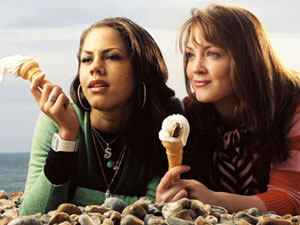 Sugar Rush is a critically acclaimed British television comedy drama series developed by Shine Limited and broadcast by Channel 4, based on the Julie Burchill novel of the same name. It is centred around the life of 15 year old lesbian Kim Daniels who, at the beginning of the first season, moves from London to Brighton, where she meets future best friend and love interest Maria "Sugar" Sweet, a rebellious, promiscuous, binge-drinking, drug-taking, shoplifting, street-smart young girl of Kim's age. Kim becomes sexually obsessed with Sugar, and the show's first season centres around Kim struggling with her sexuality and her feelings for Sugar, while at the same time trying to deal with her dysfunctional family (parents Nathan and Stella, and her younger brother, Matt) and the unwanted advances of her next-door neighbour, Tom. The second season shows Kim as out and proud, but with a new love interest, Saint, after having gotten over her obsession with Sugar (the two are, however, still best friends), and, as always, dealing with her parents and younger brother.

A third season was rumoured, but it ultimately seems that it will never see the light of day, due to Channel 4's cancellation of the show. This move outraged viewers and critics, as well as the show's two stars, Olivia Hallinan and Lenora Crichlow.

Not to be confused with the Disney animated film Wreck-It Ralph, which was released under the title Sugar Rush in Japan, or the Fictional Video Game from the film that provided that title.