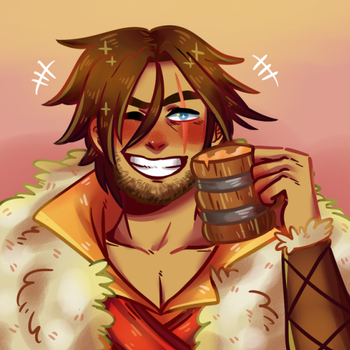 Am I drunk? If I am not, then this cup must be quite the flirt!note Trevor Belmont fan-art

How do you convey a character is drunk? Well, staggering around and slurring their words (with the occasional Alcohol Hic) is the most obvious way. If you want to be more whimsical about it, there's the Pink Elephants. If you want to get it across instantly as soon as the audience sees the person, given them a red, bulbous nose. In Japanese media, characters might get a Luminescent Blush or Blush Stickers on their cheeks instead of just a red nose.

The Truth in Television here, to a limited extent, is rhinophyma, a type of skin condition that causes growth of the nose along with redness and dilation of blood vessels. Traditionally, this has been called a "drinker's nose", but alcohol only aggravates the condition, it is not a root cause. In any event, it is a persistent condition, whereas characters in fiction will only have red noses when they're actually drunk (although for The Alcoholic, this could be all the time).

Compare and contrast Sickness Equals Redness, where illness instead of alcohol is the cause of the redness.

Since the exaggerated fictional version is a rather "cartoony" concept, it's largely a Comedy Trope. As such, it's a Sub-Trope of Gag Nose.

Example of:
Can't Hold His Liquor