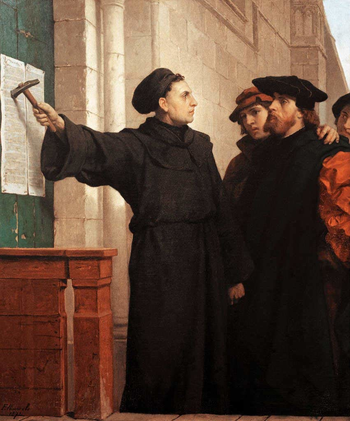 Martin Luther nailing it since Jesus.
Luther Hammers His 95 Theses To The Door
by Ferdinand Pauwels,
oil on canvas, 1872
Catholic Church: Hey Christians! Do you sin? Now you can buy your way out of hell!
Martin Luther: That's bullshit! This whole thing is bullshit. That's a scam! Fuck the church! Here's 95 reasons why!
bill wurtz: said martin luther in his new book, which might have accidentally started the protestant reformation.
Advertisement:
[shows map of Europe; northern half says "fuck the church"; southern half says "no, the church is ok"]
— Bill Wurtz summarizing the Protestant Reformation, history of the entire world, i guess

The Protestant Reformation was a significant event in the history of Christianity where in the 16th century, the church split into the Catholic church and the Protestant sects.

The story goes that on All Hallows' Eve of 1517, an Augustinian monk named Martin Luther nailed a piece of parchment on the doors at the All Saints' Church in Wittenberg. That parchment was named the "95 Theses", condemning the practice of the indulgences, a way of paying the church to absolve one's sins. That stunt, at best, would have looked insignificant and a bit of an annoyance at the onlookers' perspective, as nailing parchment on doors was common at the time, but this particular parchment kickstarted the events to come.

By Luther's time, the Catholic Church had fallen into decay, considered by many to be a Corrupt Church. In addition to the offering of indulgences, illegitimate children and misuse of church property by priests were widespread, as exemplified by Pope Alexander VI (1431-1503), who openly used his illegitimate children for political gain and had a number of enemies murdered.

There had been a handful of attempts to reform the church prior to Luther, such as St. Catherine of Siena, John Wycliffe, and Jan Hus. Their efforts and success varied; Jan Hus was even burnt at the stake for his calls to reform. Compared to them, Luther had one advantage: the printing press. And with this incredible machine that had produced copies of the Gutenberg Bible, his prints of reform and his vernacular translation of the Bible were easily spread throughout Europe.

With the Edict of Worms (1521), Luther's teachings were banned in the Holy Roman Empire, but they continued to spread throughout Europe regardless. In 1530, Luther and his companion Philip Melanchthon published the Augsburg Confession

, in which they defined in 28 articles what a Protestant believed in and what they wanted to change in the church. This confession was adopted by breakaway state churches of the principalities of Saxony and Lubeck, and soon were widely adopted in most of modern-day Germany, Prussia and Scandinavia. Leading to what we call today the "Lutheran Church".

However, Luther wasn't the only one. He inspired a number of other theologians to preach against the Catholic Church. Starting with Huldrych Zwingli in Switzerland, through the Anabaptists (a broad movement which include the modern-day Hutterites, Mennonites and the Amish), John Calvin in Switzerland, John Knox in Scotland and later Jacobus Arminius in the Netherlands. Calvin, Zwingli, Knox and Arminus are part of what is called the "Reformed" traditionnote Also called "Calvinist", which is Non-Indicative Name as some of the Reformed had big disagreements with Calvin's theology.. They differed from Lutherans not only in theology, but also in the purpose of the Reformation: Luther wanted to reform the Catholic Church from inside-out, while the Reformed wanted to "return" to the primitive church, breaking away and organizing themselves into independent churches — which would eventually be a bit of a moot point since the Catholic church did their own "reformation" (see below) and the Lutheran churches are still separated to this day.

Of course, the different reformers couldn't all agree with each other. Luther and Zwingli butted heads regarding the Communion, as Luther believed in the "Real Presence of Christ" in the Eucharist while Zwingli believed that it was mostly symbolic. Meanwhile the Anabaptists belived Zwingli and Luther weren't radical enough and instituted adult-only baptism, even "rebaptism" (baptizing again even if you were baptized as an infant), and preached that the faithful should live in total pacifism, and also live separate from society to be truly pious. The Augsburg Confession explicitly condemned them and the Anabaptists would be persecuted by both Catholics and Protestants alike. The Calvinists and Lutherans never became hostile to that point, but there's a significant difference in both theologies and in worship culture: Lutheran churches will often have stained glass, paintings and crucifixes (as Luther wasn't iconoclastic) while their Calvinist counterparts are consistently plain, austere and devoid of images.

In contrast, Italy, France, and Spain remained staunchly Catholic, though a highly persecuted Protestant minority in France, the Huguenots, sparked considerable conflict. Although in an emblematic case of Realpolitik, France would later join the Protestant side during the Thirty Years' War to oppose the Hapsburgs.

Britain confused the matter further when English King Henry VIII declared himself head of the new Church of England, dissolving the monasteries, colonizing Catholic Ireland, and divorcing his first wife Catherine of Aragon for Anne Boleyn in hopes for a male heir note which proved futile as she bore a daughter, but a great daughter nonetheless. Scotland would convert to Protestantism through the preachings of John Knox, and would influence king James VI and I throughout his whole reign(s), such as the translation of the Bible in English, named in his honor. The reigns of Henry VIII and his children, and James VI and his children would lead to a century and a half of conflict over whether the new Church was Catholic or Protestant.

Luther's challenge shook the church to its core, and it embarked on a Counter Reformation (sometimes called the Catholic Reformation) that altered how it operated. The Council of Trent clarified Catholic theology, curbed the abuses of indulgences note The quantification of indulgences was further reduced by early 20th century, and they are saved for special cases, such as the Vatican granting special indulgences in connection with the Coronavirus pandemic

, and the church also improved training for priests and created new religious orders, such as the Society of Jesus (often vilified by Protestant writers, thus the Evil Jesuit trope).

The Protestant Reformation ignited a century of religious conflict, as countries used religion as an excuse to perpetuate existing rivalries, and Protestant minorities rose up against their Catholic rulers. The Protestant Dutch fought for 80 years against their deeply Catholic Spanish rulers, France was embroiled in a bloody civil war, and many localized religious conflicts within the Holy Roman Empire eventually enveloped all of Continental Europe in a conflict from 1618-1648. The British Isles largely escaped the brunt of it, but were embroiled in their own conflicts that culminated in the English Civil War (1640s-1660s).

While they actually originated before Luther's theses, The Spanish Inquisition quickly switched from ferreting out secret Jews and Muslims, to ferreting out Protestant heresy in Spain. They are often credited with keeping Spain Catholic during this time.

The Protestant Reformation indirectly fueled the contemporaneous Age of Exploration. Spain sought to conquer the New World in order to gain more souls for the Church, while their rival England sought to counter them. English Protestants fled persecution to North America, leading to the establishment of The Thirteen American Colonies and later The United States.

For extra irony, Wittenberg, the birthplace of the Reformation, is nowadays a secular city, due to the influence of state atheism back when the city was under communist East Germany during the Cold War. Nevertheless, there are still a handful of Lutherans in the city that keep the Reformation flame burning.

See Christianity to get a better idea of what exactly these guys were fighting about.

The Cavalier Years overlaps with the latter half of the time period, and religious warfare is often a background feature in the swashbuckling plots of this setting.

The general timeline of the Reformation started with the posting of Luther's "95 Theses" in 1517 and ended with the signing of the Treaty of Westphalia that ended the Thirty Years' War in 1648; Britain may extend it with the Glorious Revolution in 1688 and the Jacobite rebellions until 1745. Meanwhile, for Czechs it usually begins a century earlier than the rest of Europe, with the death of Jan Hus in 1415 (if not earlier, with his preaching), and may end either in 1627-28 when Catholicism was proclaimed the only religion in the Hapsburg Austrian Empire, or even later than in Britain with the Toleration Patent of Josef II in 1781 which marked the end of post-Thirty Year War Counter Reformation in the empire.note To many an official's shock at the time, even over 150 years after the Emperor Ferdinand II's outlawing of Protestantism, there were large numbers of secret Protestants in the Czech lands who flocked to the Protestant churches the moment they could.

Works set in the time period: