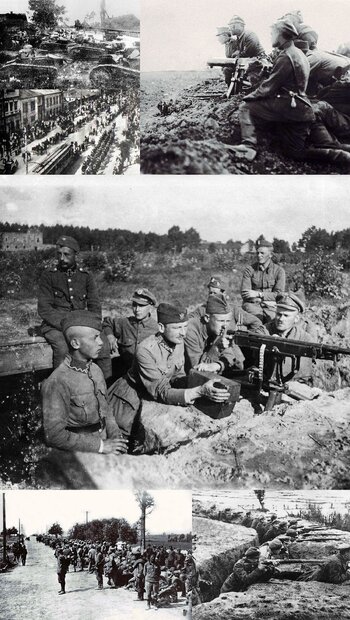 "Only the sword now carries any weight in the balance for the destiny of a nation."
-Field Marshal Józef Piłsudski
Advertisement:

This was a war in from 1919-1921 over the existence and size of Poland. Since the late 18th Century there had been no such a thing as independent Poland, the Polish-Lithuanian Commonwealth having been partitioned between the neighbouring powers (Prussia, Russia, Austria) and the title of 'King of Poland' ultimately claimed by the Russian tsars. During World War I, the Germans formed a puppet Kingdom of Poland out of Russian territory with King Friedrich Hohenzollern (crowned Wilhelm II) of Germany. Austria-Hungary initially protested this move as they wanted Polish territory for themselves, with some parties wanting to create a new country of Poland to add to the Austro-Hungarian union and so make the country into more of a federation (there also being rumors about the creation of Croatia).

However Russia's mid-1916 Brusilov Offensive destroyed Austria-Hungary's already meagre bargaining power with Germany in the east and they eventually conceded Chancellor Bethman-Hollweg's point in early 1917: Poland would be under Germany's economic and military leadership after the war. And Austria-Hungary would just have to be content with some minor border changes. Unfortunately for the Germans, recruitment for the Polnische Wehrmacht netted fewer than ten thousand volunteers. Germany's refusal to concede Polish independence meant that only people who wanted the wages (or training) and didn't mind the disapproval of their neighbors and family joined up. Later in 1917 Bethman-Hollweg was removed by a Reichstag Vote of No Confidence called in response to the failure of the Unrestricted Submarine Warfare policy (which they'd voted for and he had actually opposed). His removal meant that the leadership of Germany fell to the Oberste Heeresleitung (OHL, Army High Command) and more specifically Hindeburg and Ludendorff. Germany's vision for the future of eastern Europe accordingly took a turn for the megalomaniacal, envisioning German domination of the entire post-war region.

When the Russian Red faction signed The Treaty of Brest-Litovsk with Germany in early 1918, Poland's status as a German satellite was affirmed by both sides. However, Germany went on to suffer staggering losses in her 1918 Spring Offensive and her army was shattered by the Entente Cordiale's Hundred Days' Offensive that summer. Faced with a starving populace threatening to rise up in revolution against them, the German Junta gave control over to the civilian government which promptly arranged a cease-fire and promised to formally surrender in the near future. The government of the Kingdom of Poland, under the leadership of Polnische Wehrmacht commander General Józef Piłsudski (pronounced 'piwsudski'), refused to be disarmed alongside the Deutsche-Wehrmacht: instead they started expanding their army, declared full independence, and promptly invaded Austria-Hungary (to occupy mostly-Polish Galicia and mostly-Ukrainian Podolia).

But while Russia had collapsed into Civil War and the Central Powers had been defeated and were being disarmed, the borders of all the new countries of central and eastern Europe were disputed. Poland's border with the de facto successor-state to the Russian Empire, the Russian Socialist Federal Soviet Republic (RSFSR, later reformed into 'the Soviet Union' with the addition of additional republics including Ukraine and Belarus) was particularly contentious. Although the Russian Reds had been swept to power on promises of ending the food-shortages in Petersburg and Moscow, the continued economic crisis and Civil War severely disrupted Russian agriculture and led to the shortages becoming outright famine. Desperate to secure enough food to feed their troops and power-base in the cities, the Red Army began to raid the Russian countryside for food - causing artificial famines. Since the Polish-Soviet border was unclear, Red Army food-raiding parties soon clashed with Polish Army forces who refused to let them plunder 'Polish' villages (though the population in those areas was generally Belorussian or Ukrainian).

In 1919 the anti-Bolshevik forces had finally rallied under Admiral Kolchak's leadership and were waging a furious campaign to attempt to link up their forces in Russian Asia with those in the Caucusus before marching on Moscow. With the Red Army strained to its limits trying to fend them off, the Polish Army saw this as a perfect opportunity to strike against the Reds and launched an offensive/intervention/territorial-consolidation operation into Soviet-held Belorussia and western Ukraine to improve Poland's bargaining position with the Reds in the negotiations over their mutual border. The early phase of the war was more an extended 'incident' (with little government support in terms of reinforcements, food, or ammunition being sent to either side) than a proper war, but in any case things soon got a bit more heated and neither government was particularly fussed about how it started.

With the Red Army otherwise occupied fighting the Whites and Greens, the Polish army occupied territory far in excess of what it could realistically hope to control with the forces and logistical train she had available - the war had devastated the horse-population of near-eastern Europe, but more importantly Poland lacked trains and train-cars she needed to supply such big forces over such incredibly long distances. So when the more-numerous and better-supplied Red Army finally crushed the back of White resistance, regrouped opposite the Polish forces, and launched an offensive operation they met with quick and thorough success. While they captured huge swathes of Polish-occupied territory, they too advanced to the limit of their own supply lines in their haste to advance. In the very heartland of Poland, on the outskirts of Warsaw itself, the Russian offensive was brought to a halt. Worse, their positions on the outskirts of Warsaw were unhinged by a flank attack which caused the lead elements of the Red Army to rout as fast as they could while malnourished. This engagement became an important part of the mythos surrounding Poland's military dictator, Marshall Piłsudski, and Polish national history in general. In both narratives it is called 'the Miracle of the Vistula' (after the river that runs through Warsaw).

With the Poles looking like an un-palatably tough nut to crack at a time when the Soviet economy was teetering on the brink of collapse under the strain of (by that point) seven years of non-stop warfare - and Red Army forces needed elsewhere to crush the last White, Green, and Black holdouts - the Soviets resigned themselves to the reality of Polish independence and signed a ceasefire soon afterward. The French, taking advantage of their numerous contacts within both Poland and Russia and the high regard in which they were held by both, mediated at the peace-talks that followed and the border the three agreed upon remained in-place until 1939. The Soviets later coughed up the money to fortify their half with the so-called 'Stalin Line', but the Poles were too poor to reciprocate.

At the time the Battle of Warsaw was credited with saving Europe from the Bolsheviks, who've been stating their intention to carry the Revolution to the West, especially Germany. The basis for this claim is the heavily turbulent political climate in Germany and other countries of the region (Hungary had its own failed Red revolution), which might've been tipped to the favour of local Communists if the Red Army appeared on the doorstep. Of course, opinions vary on reality of that. What is clear, anyhow, is that the battle kept Poland from becoming a Socialist Republic of the Soviet Union.

The Polish-Soviet War in fiction :