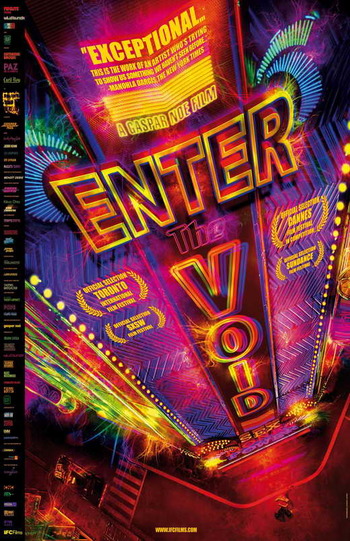 Enter the Void is an experimental art drama film co-written and directed by Gaspar Noé, with Noé summarizing it as a "psychedelic melodrama". The entire film is seen through the Unbroken First-Person Perspective of its protagonist through strict point-of-view shots, including momentary blackouts to represent blinking, and extended hallucinatory sequences.

A rough cut of it premiered at the 2009 Cannes Film Festival, with the post-production required of the film delaying its wide release in France to a year later, with Germany and Italy receiving further releases across 2010 and 2011.

The film opens with Oscar, a young American man, living in Tokyo and supporting himself by dealing drugs, against the advice of his sister Linda and his friend Alex, who attempts to turn Oscar toward spirituality with The Tibetan Book of the Dead. When he and Oscar leave to deliver drugs to Oscar's friend Victor, Alex explains parts of The Tibetan Book of the Dead aloud to Oscar along the way — namely how the spirit of a dead person sometimes will stay among the living until it begins to experience nightmares, after which it will attempt to reincarnate. Just as the two get to sit down at a bar, the police come to swarm the place. Oscar is chased down into the washroom stalls, where he desperately tries to flush away his incriminating drugs.

As his spirit rises from his body and watches over the events which follow, the audience views everything from his perspective, from the aftermaths of his loved ones' lives to dreams that unveil aspects of his past.

Enter the Void was a long-time passion project for Noé, synthesizing a number of things he had grown fascinated by in his early life — themes of death, existence and the afterlife alongside aesthetics of psychedelia and surrealism. His failed initial attempts at getting sufficient funding for the film inspired the creation of Irréversible, which he retrospectively considered a "bank robbery" to finance Enter the Void, as well as a helpful technical exercise.