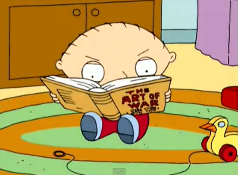 Genius is a very rare thing, and it often takes years of education, study and work to attain it. But genius can begin to show itself at a very young age, resulting in Teen Geniuses and Child Prodigies. But what happens if it shows up even sooner than that? The result is the Brainy Baby.

The Brainy Baby is any infant with the intelligence of a rocket scientist. Not only can he speak, but he can speak 10 different languages fluently, know the complete works of William Shakespeare, and figure out how to invent time travel, all just coming out of the womb. The baby may be an Instant Expert if they're actually shown in the process of learning any of these things, given how little time they've even been alive, or they might just know them in a similar way to how someone who says Screw Learning, I Have Phlebotinum! can increase their knowledge by boosting their intelligence.

This is most commonly Played for Laughs, especially when the baby's hypercompetent in areas that would call for some amount of physical prowess, rather than just intellect; having a baby be The Ace, besting grown men and women at everything they do, is inherently funny. However, it can also be played straight if the intent is to show that the character has such an exceptional brain that they are to a Child Prodigy what a Child Prodigy is to a "normal" genius.

Some cases of this trope are actually smart adults or teenagers who've been subjected to reverse aging. Others are some variety of immortal and age much slower physically than mentally.

Despite being in an infant's body, Jimmy's grandmother retains her adult intelligence.

Despite being in an infant's body, Jimmy's grandmother retains her adult intelligence.