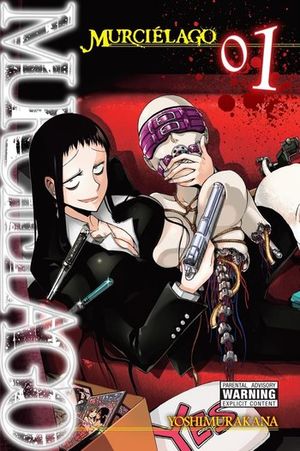 Ex-mass murderer turned hitwoman Koumori Kuroko lives in a city overflowing with heinous crimes and violence. Even though she is now a hired assassin by the Japanese police force, she has a record of murdering 715 people in the past since her childhood. Now, she partners with Tozakura Hinako—a wild, lighthearted and innocent yet bold girl who drives like an absolute maniac—to destroy other mass murderers who are deemed unstoppable by normal means. And just because she's got a job to do, doesn't mean she can't have a good time with the ladies...
Advertisement:

Murciélago started being publised in August 2013 in the Seinen magazine Young Gangan and it is still ongoing as of 2021.

Yen Press began releasing the English translation in January 2017 compiled in 19 tankobon volumes as of May 2021.