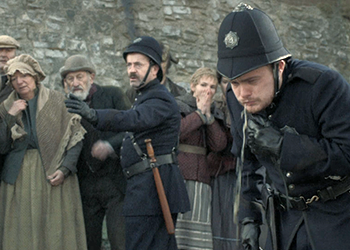 Cor blimey!
"Any minute now, the cops'll be here to sort this mess out. I'd appreciate it if somebody could get some barf bags ready."
— Overheard at the site of a car crash
Advertisement:

A trope specific to murder mysteries, invoked to suggest that the crime is so gruesome (sight and/or smell) that it turns the stomachs of even hardened investigators. Alternately, the Vomiting Cop is a rookie on their first case, or it is used to show how seasoned and jaded the veteran cop is.

There are two variations:

While definitely not a Discredited Trope (mainly because it happens a lot in Real Life), it is almost as often used in parody as straight.

Sometimes a Vomit Indiscretion Shot, but usually a Vomit Discretion Shot. Very often used as a variant on Gory Discretion Shot, where the gory stuff has been done but the evidence remains. See also Selective Squeamishness Suppression, Take Our Word for It. Contrast Autopsy Snack Time, Nausea Dissonance. Stress Vomit is the Super-Trope to this one.